How To Play Guide For Birthdays the Beginning

The introduction starts with the player meeting Navi, a creature, who used to create whole worlds. He now needs help from the player to do this, and that's how the first Episode of Birthdays the Beginning starts.

Navi is the instructor and little helper of the Avatar. Once he could grow worlds on his own, but now he needs help!

The player character is represented by a small flying avatar. If the player likes to, he can name the Avatar. The player can see the Level and HP on the screen to the left. There is also the item menu.

The cursor is a blinking red square, which is used to alter the Cubeworld.

The mini map is a top down view on the whole cube.

The location of the avatar is shown by a red pin.
Locations on the map are marked red. Items appear as yellow dots.
Organisms appear as tiny pink dots

Similar as Macro Mode, but it's the mode, where players can terraform, pick up items and capture (select it with the cursor and press B) organisms. Capturing organisms gives the Avatar XP and is necessary to level up. Collecting items is important for the terraforming process. Life forms are displayed as tiny pink dots in the mini map. 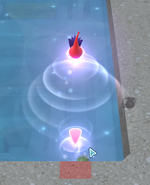 In this mode, terraforming is not possible, but one can have a closer look at the life forms. The Avatar can descend (,) and ascend with (.). Press V to enter this mode.

Shows all important news of the world, which organism appears, which is nearly extinct?

Shows the Air temperature, how much plant and animal life and land and water mass the world has.

How to build a world[edit | edit source]

While Navi will be a little helper in the beginning of the cube, players should always check and press N, which opens the game menu. From there, players can watch their current cube status, they can save their progress, see their library of collected organisms and the game settings.
Players should meet the necessary conditions, if they want to create successfully a thriving cube. Lowering the land increases temperatures, while highlands lower temperatures. Players should always have an eye on the cube status.
There are many items to be found in the world, which can help the development of the world.